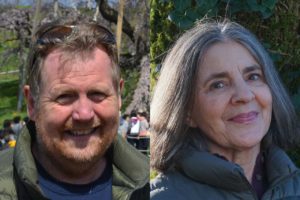 We are delighted to appoint Tony Kirkham MBE and Sue James AA Dipl RIBA as Honorary Fellows in recognition of their service to the advancement of arboricultural knowledge.

Before retiring in 2021, Tony Kirkham MBE had a distinguished 43-year career as Head of Arboretum, Gardens and Horticultural Services at the Royal Botanic Gardens, Kew, where he

was responsible for the management and curation of more than 14,000 trees. Regularly appearing on TV to share his love and expertise of trees, Tony is also committed to encouraging young people to consider a career in arboriculture.

He was awarded the RHS Victoria Medal of Honour in 2019 and an MBE in 2019 for services to the Royal Botanic Gardens, Kew and Arboriculture, and was made an Honorary Lifetime Fellow of the Arboricultural Association in 2015, receiving the Association’s Lifetime Achievement Award in 2019.

The Institute looks forward to presenting Tony with his award at National Conference 2022: Climate Smart Forestry, taking place in Glasgow on 26 and 27 April.

“I have had the most enjoyable and amazing career working with trees. To be recognised for all your achievements helping to promote the science and enjoyment of trees by members of your profession is indeed an incredible accolade and such a humbling feeling, and I look forward to the conference in spring.”

Sue James AA Dipl RIBA is a chartered architect and a founding member and convenor of the Trees and Design Action Group (TDAG), established in 2007, gaining charitable status in

2013. Led by passionate individuals from both the public and private sectors, TDAG’s work increases the awareness of trees in the built environment, highlighting the benefits trees can bring by influencing the planning, design, construction and management of urban infrastructure and spaces.

She is a huge advocate for trees and is an influential figure in the sector. Sue has worked in a private practice in West Wales focussing on sustainable buildings and she was also a consultant for the Derek Lovejoy Partnership. She is an invaluable member of the Institute’s Trees, People and the Built Environment conference steering group and, for many years, has been an adviser for Futurebuild on the content for their programmes.

“Being awarded an Honorary Fellowship of the Institute of Chartered Foresters was a surprise and I feel very honoured to have been considered. I am also very encouraged because all of our combined efforts over the years have not only brought ‘trees’ and especially ‘urban trees’ up both the political and practice agenda, but trees have also been a catalyst for inter-disciplinary collaboration. Part of this success has been, I feel, the development of the Trees, People and the Built international urban tree research conferences which the Institute had the foresight to agree to host when Mark Johnston first put the idea to Shireen Chambers MBE FICFor in 2010 leading to the 2011 conference and those held every three years since.

But I am also conscious that the work that I have done through the Trees and Design Action Group over the last fifteen years or so has not been a sole effort, but its success has depended on a number of dedicated people of whom a few must get a mention here – Martin Kelly, who as Land Planning Director at Lovejoy, was willing to host the first round table event when I suggested it and has supported TDAG ever since; Jim Smith MICFor of the Forestry Commission; Keith Sacre MICFor and Jeremy Barrell FICFor; Anne Jaluzot, who has undertaken all of our research and the writing of our major guidance documents; Emma Ferranti at the University of Birmingham who organises our TDAG seminar programme and conceived and developed our First Steps Guides; Steve Parker who has set the ‘TDAG standard’ for graphics…and many more who quietly contribute often in the background.”