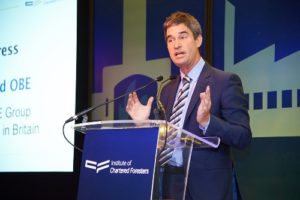 More than 250 delegates attended the 2016 ICF National Conference: The Timber Supply Chain: Dynamics and Opportunities on 27-28 April in Newcastle. Keynote speaker Dr Peter Bonfield OBE, Founder of Grown in Britain, challenged the conference delegates not to passively listen to the discussion, but to really “think what you can give”. These sentiments were taken literally by many, as the conference saw a stimulating debate on the challenges and opportunities facing the sector. 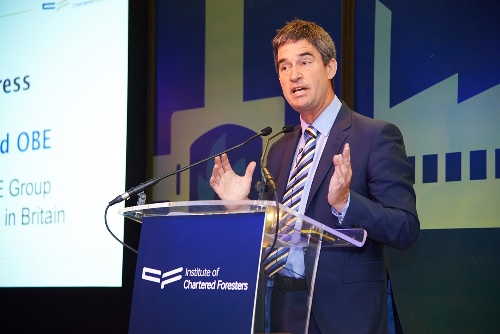 One of the early discussions was whether the elephant in the room’s name was ‘monoculture’, or ‘cost’. Delegates learned that on one hand, the timber sector’s dependence on Sitka spruce was creating an imbalance, one that threatened both adaption and market potential. Forest Research’s Gary Kerr FICFor advocated that the strapline of the event should be ‘Don’t be afraid to diversify.’ Meanwhile Session 2 Chair Tim Liddon FICFor, Forestry Director at Tilhill Forestry, put forward that there was little that could currently rival Sitka from a cost, social and environmental perspective. This feeling was echoed by both Elspeth McDonald MICFor, Scottish School of Forestry and Dr Dan Ridley Ellis, Edinburgh Napier University, who reminded us of the work that has gone into Sitka and the fact that our knowledge of the species’ UK performance was so great.

Delegates appeared to agree that Britain is putting insufficient funds into research in this area, with the need for long-term experiments to assess new and existing species for market potential. The conference benefitted from overseas perspectives, with Professor John MacKay, Wood Professor of Forest Science at Oxford University, discussing American and Australian case studies and the potential of genomics to inform tree selection and breeding value.

Forestry Will Help the UK Renew Itself

On Day 1, Sheila Ward, Head of Statistics at Forest Research, demonstrated trends in UK timber demand, showing that demand for softwood in particular was increasing. Sheila was followed by Forest Research’s National Inventory Manager Ben Ditchburn, who demonstrated a changing landscape of timber availability – predicting an increase in production over the next 50 years followed by a decline and eventual levelling out. 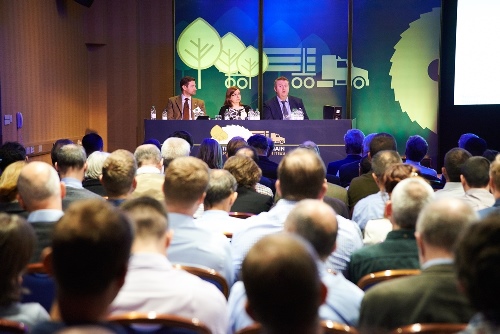 On Day 2, Robert Wilson, of Amec Foster Wheeler plc, reinforced the potential of the sector, which he highlighted as being bigger than the chemicals / pharma and textiles industries and unlike many others, a survivor of the recession. He predicted that forestry and timber would play a big role in how the country was going to renew itself, saying;

“Other non-renewable industries have peaks, we have choices.”

These choices were evident from the many examples of new markets presented at the conference. Roger Kilburn, CEO of the Industrial Biotechnology Innovation Centre in Glasgow gave an enthusiastic talk about the role of biomass in the decarbonisation of the UK energy system, while Matthew Rivers FICFor, Director of Biomass Business at Drax Power, offered a private sector perspective. Matthew demonstrated that the UK is still import-dependent and with such competitive prices currently coming from the US, this would be hard to challenge.

Opportunities in the construction sector were also widely discussed, with a series of engaging talks from UK architects who provided insights into the use of timber in design. Anthony Thistleton declared the 21st century a new ‘Wood Age’, while Neil Sutherland called for a change in thinking when it came to the construction of volume housing in order to reap the benefits of carbon capture. Peter Wilson, Managing Director of the Timber Design Initiatives, told the conference that foresters were ‘not selling hard enough’ in this regard. Taking a poll as to whether the audience considered architects their customers, he said:

“There are 569,000 architects in Europe who specify [construction materials], and you don’t consider them customers?”

The conference also learned about the kinds of technology that would help them take their businesses to the next level. Treeconomics’ Garrett Mullooly and CarboMap’s Antoine Cottin were among the speakers discussing the potential of terrestrial laser scanning and remote sensing respectively. 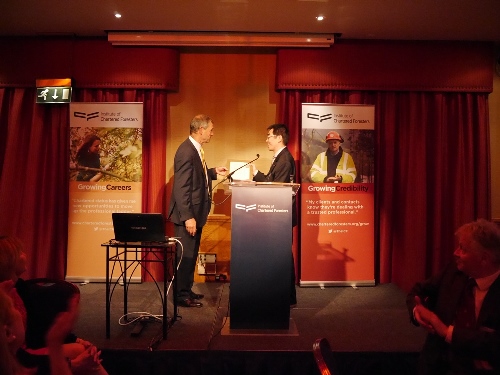 It was a full house at the ICF National Conference Dinner, which provided an occasion for delegates to network in a more relaxed environment. Several of the Institute’s awards were presented at the event including the Institute’s Medal, which was awarded to Ian Ross OBE FICFor and an honorary fellowship of the Institute, which went to James Hepburne Scott. Dr Wei-Yew Chang of the University of British Columbia, attended the dinner to accept his Forest Economics Prize, presented by Dr Gary Kerr FICFor on behalf of ICF and its journal, Forestry.

Institute Announces New Chair of the Examinations Board 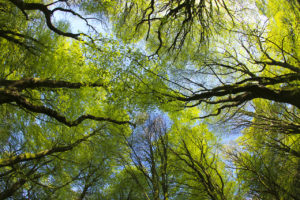