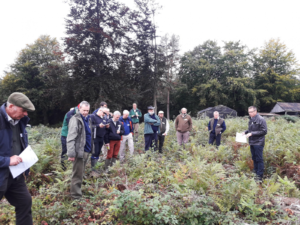 In September the ICF North England Regional Group attended a meeting hosted by Sir William Worsley, Tree Champion, on his Hovingham Estate near Malton North Yorkshire. High yielding conifer production and amenity tree management within the Howardian Hills Area of Outstanding Natural Beauty (AONB) were the topics of the day.

Sir William Worsley opened the meeting and welcomed the group to his estate. While the Hovingham Estate is a mixed rural estate one-third of the estate consists of woodland, which has seen continuous woodland management for over 120 years. The estate has adapted its woodland management regimes through the years. Originally the estate’s principal species was Oak, in 1897 the then agent Binley Day embarked on plantation forestry on the estate. This change in direction was commercially driven following the move to ironclad ships in the mid-19th century. The estate’s philosophy has always been to produce high-quality timber through high-quality woodland management. Larch was the principle coniferous species on the estate, in 1988 they changed to what Sir William termed the ‘Hovingham mix’ consisting of Douglas Fir, Sitka Spruce and Corsican Pine.

Sir William concluded his opening address with inspiring words on his new role as Tree Champion, with his desire to see 11 million trees planted ‘to smash’ this target. He wants to bring about a change in culture towards trees, get the right balance in land management and bring everyone together, moving in the same direction. Sir William’s passion for woodland management was clear to see.

David Brown MICFor, the Hovingham woodland manager, who is the fourth generation Brown to manage the estates woodland, gave an excellent overview of the estates restocking and establishment regimes.

Richard Parsons, Commercial Director Maelor Forest Nurseries then gave the group an overview of the work Maelor are carrying out through tree breeding programs and research. The group discussed environmental impact and the resilience which needed to be considered when deciding on species choice. Single species choice is a big risk, taking a mixed species approach as the Estate is, gives resilience in the medium term. The group discussed with input from Paul Jackson MICFor Howardian Hills AONB the impact tree selection choice can have on the landscape value, together with the estates need to keep the woodlands on a commercial footing.

Richard Parsons told the group that improvements have been made to root development of MOO80 Veg prop transplants however due to their production method the transplants remain more expensive than other options. With this in mind, Richard suggested that the use of VP stock should well be considered as on poorer quality sites it would be difficult to get the extra value out of the transplant against the extra cost of the transplant.

David Brown spoke about the estates thinning regime while standing in a mixed Sitka Spruce, Douglas Fir, Western Hemlock and European Larch crop with an average yield class of 24. An interesting proposal was tabled by one of the group, – had the estate considered a change in approach to thinning with a move towards target diameter thinning? This thought started some considered debate and one that the estate may consider further down the line and perhaps in a corner of the estate as a trial.

Alastair Boston, Deer Liaison Officer Northern England, gave a very interesting presentation and called for estates and landowners to work together to tackle the growing problem of an ever-increasing deer population. With the UK deer population at around 1.5 million, there needs to be a 30% yearly cull of hinds to just keep the population static. Alastair told the group that one of the best advancements in stalking recently was the introduction of thermal imagery equipment for spotting deer on restocking sites. The introduction of this equipment has increased the efficiency of stalkers leading to an increase in the cull rate of 30%. Alastair announced to the group that The Deer Initiative had just launched a new Best Practice guide to deer management and encouraged land managers to review this. Alastair presented Sir William with a copy of the document, the guide is available on their website.

The afternoon session saw discussions led by Luke Steer MICFor at Hovingham Village green on the management of a group of high amenity value veteran Lime trees. The group discussed: ground compaction from car parking on the green area, liability issues, historic landscape value and potential tree work options. The range and breadth of discussion on this particular scenario highlighted the complexity of considerations involved in formulating a management proposal to suit the individual situation.

The North England Regional Group committee would like to thank the presenters for their excellent contribution to the day, in particular to Sir William Worsley and to David Brown for hosting a most interesting day.