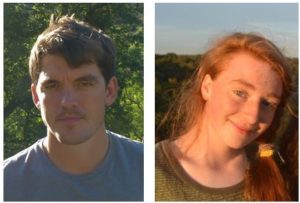 Nicholas Hill and Ellinor Dobie, ICF Student members at Bangor University, are both winners of the 2016 Prince of Wales Forest Leadership Award.

Four top students from Canada and the United Kingdom have been selected as this year’s recipients of The Prince of Wales Forest Leadership Award.

Endorsed by HRH The Prince of Wales, and delivered in partnership by the Canadian Institute of Forestry (CIF-IFC), the Institute of Chartered Foresters (ICF), and the Duchy of Cornwall, and sponsored by TD Bank, the Award recognizes young forestry professionals in Canada and the United Kingdom who possess a dedication to sustainable forestry and the skills and aptitude to become our future forest leaders.

The UK and Canadian recipients will participate in an international exchange experience during the summer of 2016, taking up work placements in their respective partner countries. They will be placed in roles at some of the top forestry and natural resources management employers in Canada and the UK, in addition to receiving a $12,000 CAD bursary.

“Given the incredible response and enthusiastic testimony of both recipients and employers last year, we are very excited to continue building on this success and look forward to another fantastic summer,” said Dana Collins, Executive Director of the CIF-IFC.

“I am delighted by the considerable interest that continues for this Award, as highlighted by the calibre of the young people applying. The Award will further forge our relationship with the Canadian Institute of Forestry. I wish Clement, Sarah, Nicholas and Ellinor every success and I look forward to hearing about their wonderful experiences.”

“Forests are key to a healthy environment, and it’s tremendously important that we develop forestry leaders who understand both this and the significant social, cultural and economic contributions that forests make,” said Karen Clarke-Whistler, TD’s Chief Environment Officer. “These leaders will have an essential role to play as our world becomes more urbanized and the pressure on our existing forest resources increases.”

“ICF congratulates all recipients of The Prince of Wales Forest Leadership Award. This is a once-in-a- lifetime opportunity for our future leaders in the fields of forestry and urban forestry to broaden their knowledge and make great contacts among their UK and Canadian counterparts. We look forward to welcoming the Canadian winners to the UK, and hope that it is an invaluable learning experience in both countries” said Russell Horsey, Development Director at the Institute of Chartered Foresters.

The year’s recipients of The Prince of Wales Forest Leadership Award include:

Clément will be graduating from the Laval University this spring with a Bachelor of Science in Forest Management, plus holds a previous Forest Technician diploma from the Mbalmayo National Forestry School, Mbalmayo, Cameroon. Clément is actively engaged in sustainable and participatory forest management in central Africa, specifically focused on actions against desertification, climate change and degradation of forest biodiversity. Additionally, his actions help fight against poverty of rural people, provide training and environmental education to young people and strengthening the role of women in the processes of decision making in their communities. Clément’s steadfast dedication to sustainable forestry has earned him two prestigious awards, including the Youth Excellence Award from the Ministry of Youth of Cameroon, in the “Environmental Protection” category; and, the Canadian Institute of Forestry’s International Forestry Achievement Award, in recognition of individuals who have made unique and outstanding contributions to international forestry.

Sarah recently completed an Honours Bachelor in Environmental Management from Lakehead University, including a semester of study at the Charles Sturt University in Albury, New South Wales, Australia and a one-month International Field School exchange in Uttar Pradesh, Rajasthan, Himachal Pradesh, India. Sarah’s demonstrated work ethic and determination to complete tasks efficiently throughout her academic career precipitated her winning the Dean’s Scholar Award from Lakehead University and facilitated many professional opportunities, most notably with Algonquin Provincial Park. Most recently as Assistant Resources Management Technician with Algonquin Provincial Park, Sarah provides information to the public about sustainable resource use, and develops innovative ideas to improve educational programs.

Ellinor is a second-year student on the BSc Forestry degree run by the School of Environment, Natural Resources and Geography at Bangor University, currently studying at the University of British Columbia as part of a one-year exchange program. Ellinor a 4th generation forester, at age six made the decision to be a forester and has been unwaveringly pursuing this objective ever since. Accordingly, she has been involved in forestry her entire life, helping her parents work the 200ha of forest and small sawmill they own in Scotland. With varying experience, including three weeks with the Lochaber District Forestry Commission and time spent with Borders District Forestry Commission last summer, Ellinor has confirmed that all levels and aspects of forestry are exceedingly enticing.

Nicholas recently graduated with distinction from Bangor University with a Master of Science in Environmental Forestry, plus holds an Honours Bachelors in Business Administration from the University of Plymouth. In addition to these academic achievements, Nicholas had gained a wealth of work experience in the forest industry, including a position with Operation Wallacea, as a Tree Climber and Researcher; and, Canopy Land Use Ltd. where Nicolas gained experience in practical application of silvicultural operations and UKWAS compliance, as well as, forest inventory and silvicultural surveys to Forestry Commission protocol. Additionally, for the past several years Nicolas has been responsible for the day-to-day running of a small business, providing consultancy in forestry, arboriculture and countryside management. Nicolas also recently received The Prince of Wales Award for the outstanding student of the 2015 Woodland to Workshop courses, Woodland Heritage.