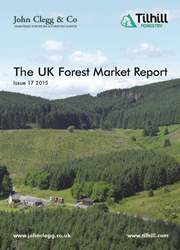 The UK Forest Market Report, produced by John Clegg & Co and Tilhill Forestry, shows that a record £151.15m of productive forests were traded in 2015. In total, 98 properties comprising 18,435 hectares were sold up to September of this year.

The report, which gives both the buyer’s and seller’s perspective on the UK forestry property market, also shows that UK timber production reached a new record, with a total harvest of 11.4 million tonnes. This was driven partly by standing timber prices, which were the highest they have been in real terms since 1998. High timber prices have contributed to the continued increase in average property price. The UK timber processing industry has continued to invest in new capacity and ‘value added’ processing. Some 40,000 people are now employed in UK forestry and primary wood-processing, making this an important employer, especially in rural areas.

Despite this, the UK is still one of the world’s largest timber importers, importing almost 80% of its total timber needs.

George McRobbie FICFor, Managing Director at Tilhill Forestry, explained “UK forestry has some of the highest environmental standards in the world and woodlands planted for timber production have multiple uses including recreation and conservation. The UK is the third largest timber products importer in the world which presents a tremendous opportunity for home grown timber.

“Indeed, the strong market in the UK is encouraging woodland creation, especially on marginal farmland. These woodlands are specially designed to produce a wide range of public benefits, as well as timber production.”

The findings of this year’s report were revealed by both companies at conferences in London and Edinburgh this month.