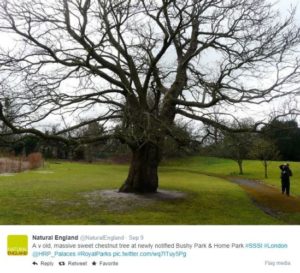 Natural England have designated two London parks as Sites of Special Scientific Interest. Bushy Park and Home Park in the London Borough of Richmond have been considered to be of special interest for their exceptionally large population of ancient and veteran trees, extensive areas of semi-natural lowland dry acid grassland, and internationally significant populations of rare invertebrates. The majority of the 540ha site is held in trust by the Crown Estate.

More than 200 veteran trees have been identified at the site of which 94 are classed as ancient. The site is the highest ranking of ten comparable sites in the Greater London area and one of only 44 sites nationally known to support more than 100 veteran trees. The trees at Bushy Park and Home Park are rare relicts of a wood-pasture management on the site that dates back to the 15th Century. The trees include oak and lime with some horse chestnut and sweet chestnut and approximately sixteen other species of tree. A notable feature is the occurrence of a large number of very old hawthorn trees, many of which are festooned with mistletoe.

There are over 4,100 SSSIs accross England, designated as such according to their reason of its flora, fauna or geological or physiographical features.

At Bushy and Home Park, the great age of many of the trees at the site provides an abundance of dead and fallen timber. Inside these trees there is a succession of fungi which actively break down the heartwood to produce a rich internal wood mould. This habitat, often deep within a large living tree, provides the perfect environment for specialised saproxylic (wood feeding) invertebrate species.

The site is home to so many rare and threatened species of wood feeding invertebrates that it ranks amongst the top five in Britain for this highly specialised group of creatures, for which Britain has international importance

Janette Ward, Natural England’s Director for Conservation Strategy and Innovation, said: “We are delighted to be able to notify Bushy Park and Home Park as England’s latest SSSI and pleased that the new designation has been supported by both the Royal Parks and Historic Royal Palaces.

“The SSSI status will help to protect a very important site for rare habitats and species and provides a great opportunity to enhance both the wildlife and people’s access to nature in one of London’s historic green spaces.”

Nicholas Mallory Garbutt, Tree and Wildlife Conservation Manager, Historic Royal Palaces, said, “We are delighted that Home Park has received this recognition of its national significance for wildlife conservation. This historic deer park is a vital part of Hampton Court Palace’s history, which has been enjoyed by everyone from King Henry VIII, to the many visitors who flock to the Hampton Court Flower Show every year.

“The results of recent wildlife surveys show that the historic trees and acid grassland of the park provide an important habitat for wildlife conservation, and we look forward to working with Natural England to continue to preserve this environment for future generations.”

Ray Brodie, Manager of Bushy Park, Royal Parks, said: “This is a great accolade for Bushy Park and confirms what we have long-known to be true: that Bushy Park is one of the finest sites in England for wildlife and ecology. Bushy Park contains many rare and important species and habitats including rare stag beetles and around ten different species of bat.

“The Royal Parks works hard to conserve and protect this unique environment, while also ensuring that Bushy Park is a peaceful haven for the many thousands of visitors who come each year to relax, unwind and enjoy the natural surroundings.”