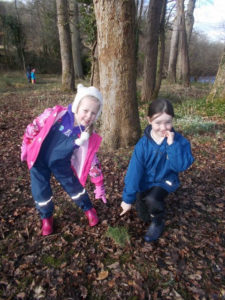 What makes a fine forest or a wonderful wood? As Scotland’s Finest Woods Awards 2018 seeks the latest cream of the crop, previous winners have a few suggestions.

Sometimes it’s a long-standing project that has learned lessons over many years and become a shining example of excellence. Carrifran Wildwood in the Moffat Hills, joint winner of the New Native Woods Award in 2017 (with Mar Lodge Pinewoods in Braemar), very much fits that description. Judges said it was a “beacon of hope” for woodland restoration projects in the Southern Uplands.

Doune Ponds in Perthshire is very different – a great example of an under-used and under-valued community asset brought back to life by a determined and very focused group of volunteers. The team’s efforts were rewarded with the Small Community Woodland Award in 2017.

Or a winner can be an example of the whole community coming together, like the pupils, teachers and parents of Underbank Primary School in Crossford, South Lanarkshire.

These are three very different projects, but all have made a real difference to the health and wealth of a community – precisely what the judges in Scotland’s Finest Woods Awards are looking for.

This year’s would-be winners have until 31st March to enter the 2018 Awards – and the 2017 victors say it is definitely worth it.

“Winning the Small Community Woodlands Award made all our volunteers extremely proud,” says Tony Farrant, Chairman of the Doune Ponds project. “It has had a galvanising effect on the wider community as the recognition made people sit up and take notice of what we had here.”

Doune Ponds was brought back to wider use after Kilmadock Community Council took over the running of the area three years ago.

“It had been unloved and uncared-for, but in a relatively short space of time, we have done a lot to improve it,” says Mr Farrant. “Winning the award was a great barometer of our success because it was recognition from people who really know about woods and forests.”

The volunteer team put in a significant network of paths to open up access to the site and this work has continued, with a detailed coppicing plan starting from early 2018.

“To anyone thinking of entering in 2018, I would say ‘Go for it’ – it has been a great experience,” says Mr Farrant.

Philip Ashmole, project corodinator at Carrifran Wildwood in the Southern Uplands, has a similar message:

“When we won the New Native Woods award, we had a big party for 60 or 70 people who have helped over the years – we are now in our 19th year.”

Over that time, Mr Ashmole says there has been a very significant change – which the judges recognised:

“We effectively started with nothing – virtually no standing trees, just three tiny pockets. It’s obvious what we have done. We wanted our project to provide both an inspiration and an educational resource and we have done that. And we have become something of an exemplar as to what can be achieved in the Uplands, which is why the judges called us a ‘beacon of hope’.”

When it comes to creating an inspiring educational resource, the 2017 judges were thoroughly impressed with Underbank Primary, a forest school which has worked with the local community to plant trees, create a carved wooden trail in the village and train volunteers to make the project sustainable.

Headteacher Margo Millar said the school community was “overwhelmed” to win the award and had been inspired to develop its projects further as a result.

The Awards also recognised a totally different project – Tilhill Forestry’s large-scale productive planting scheme at Jerah in Clackmannanshire – showing that fine forests and wonderful woods of all kinds are recognised by the programme.

Is your woodland or forest worthy of a 2018 Scotland’s Finest Woods Award? To enter, go to www.sfwa.co.uk or download the awards leaflet here