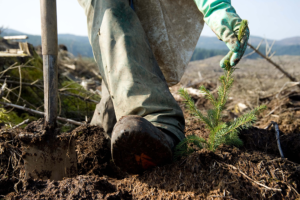 The Institute is delighted to hear that there has been an increase in the yearly tree planting figures in Scotland. Figures illustrated that 7,100 hectares of new woodland was planted during 2017/18, a rise of 2,300 hectares from the previous year.

Around 60 percent is ‘productive’ planting – specifically aimed at growing sustainable timber. This is the highest level since 2000, and is crucial in supporting the sustainable growth of Scotland’s home-grown timber processors, who have been investing heavily in recent years in places such as the extended Norbord plant at Dalcross near Inverness.

The new planting figures would have been higher but extreme winter weather delayed over 800 hectares of planting until later in the year, too late to be included in the reporting period.

In spite of this large rise, the annual target of planting 10,000 hectares each year has not been reached. However, plans and approvals already made for more tree planting in 2018 suggest that figures will be higher still for the current year.

The year-long Mackinnon review of the tree planting approval process was carried out last year resulting in a streamlining of the procedures.  Combined with an improved Forestry Grants Scheme, the conditions for planting of all types of woodland have been greatly improved.

Substantial woodland creation activity is already underway across Scotland, with many people involved, including farmers, community groups, private individuals and investors as well as forest nurseries and forestry contracting businesses.

Already, over 9,000 ha of private sector schemes have been approved for 2018 and Forest Enterprise Scotland expects to create around 650ha on the National Forest Estate. A further 2,500ha of schemes have been submitted to Forestry Commission Scotland for consideration.

“It is very positive to see the continued increase in new planting in Scotland. These new productive woodlands will help supply the recent multi-million pound investment in timber processing. We are seeing that the right Government policies deliver results, and hopefully England and Wales will soon catch up.”