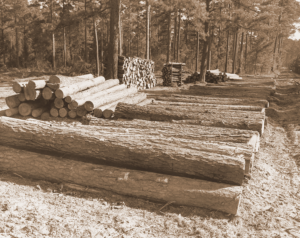 strialization and population growth in the late 19th and early 20th Centuries, and southern forests produced billions of cubic meters of hardwood, cypress, and pine to meet the insatiable demand—but at a great cost.  The history of exploitive lumbering in North America is long and sordid, replete with generations of lumbermen, politicians, and large landowners convinced that the vast forests of this continent were limitless—and local communities left with the devastating consequences when they were repeatedly proven wrong.  In repudiating the lessons of centuries of European experience in both exploitation and conservation, Americans embraced the careless use of this resource for over a century until a looming threat of a national “timber famine” became overwhelming.

But this was not the only land use crisis of the time.  Within a few decades, millions of hectares of virgin forests in the South had been cleared, and many were converted into agricultural uses—then considered to be the highest and best use of the land.  However, untold thousands of small farmers, most of whom subsisted with limited cash crops, soon learned that previously productive timberlands rarely became productive croplands.  Combined with poor agricultural commodity prices, general economic turmoil, periodic droughts, and the emergence of the boll weevil—a devastating insect pest of their primary cash crop, cotton—increased the desperation of these farmers.  When coupled with the widespread collapse of the once booming timber industry, rural economies across the South were driven to the point of imminent collapse.

It would have seemed highly improbable, then, in 1925 that an innovative southern pine forestry future was on the horizon when two Yankee-borne engineers-turned-lumbermen scraped together enough money to take over operations of a small, struggling mill in southeastern Arkansas.  Within two decades these men, Leslie K. Pomeroy and Eugene P. Connor, had taken their ambitions to develop a southern pine venture using second-growth timber—almost unheard of at that time—into a viable operation that received national and even international recognition.  With an abundance of hard work, plenty of serendipity, and an amenable resource, Pomeroy and Connor adapted the material needs of their lumber operation and their lack of a sufficiently large landbase into a silvicultural system that produced a quality feedstock from many small landowners.  These landowners benefited from their uneven-aged system—“pine tree banking”—that provided them cash income as well as incentives to keep forests as forests and to improve them for the future.

It is hard to overstate the innovation required in this distant outpost of the southern pine forestry frontier for these changes to occur.  The experiences of Pomeroy, Connor, and Ozark Badger, coupled with those of other pioneers (such as Russ Reynolds) in southern Arkansas, helped to support one of the most spectacular turn-arounds in natural resource management history.  Their work helped to restore this great forest region, vastly increased the productivity of second-growth timber, supported rural economic development and social justice, and even fostered elements of environmental education and international exchanges.  This once denuded region—with just under 2.5% of the world’s forest cover—now contributes about one-seventh of global industrial roundwood even as timber growth continues to exceed harvest.  Lessons learned decades ago in this remote corner of America show promise for comparably exploited regions today in other parts of the world facing similar challenges of deforestation, rural agrarian poverty, and the need for sustainable economic development.