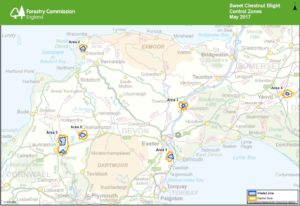 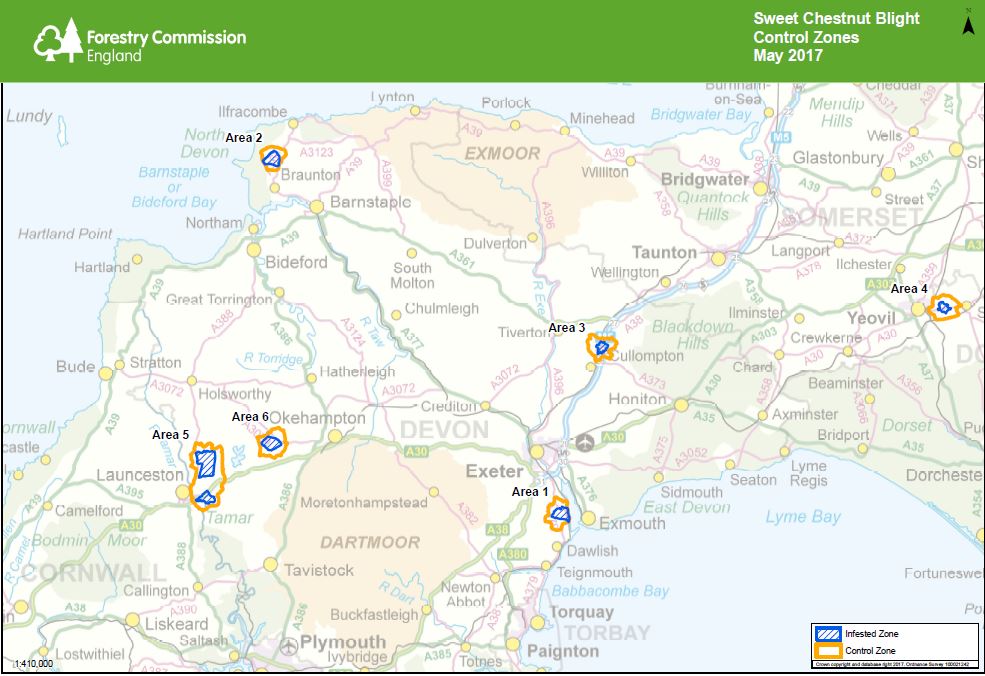 Two new zones have been identified and the restricted area within the four existing zones has been reduced. These changes apply from 12th May 2017.

UK plant health authorities – the Forestry Commission and the Animal and Plant Health Agency (APHA) – are imposing a prohibition on the movement of sweet chestnut material including plants, logs, branches, foliage and firewood out of, or within, six zones. Five of these zones are in Devon and one is in Dorset; please see attached map for locations.

Based on the latest evidence, the UK plant health authorities have reduced the boundaries of the 4 zones that are already in place for this disease.

The exact boundaries of the new zones and the revised smaller zones are shown in notices and maps on the Forestry Commission and Gov.uk websites (scroll down to relevant section).

Sweet chestnut blight is caused by a fungus called Cryphonectria parasitica and does not pose any risk to people, pets or livestock. It is only known to seriously affect sweet chestnut (Castanea) species. Although the fungus can occasionally affect oak trees, usually when they are standing very close to heavily infected sweet chestnut trees, it does little damage to them. It does not affect horse chestnut (Aesculus) species.

The prohibition on movement is implemented by The Plant Health (Sweet Chestnut Blight) (England) Order 178/2017. The original prohibition came into force on 21 February 2017. This legislation is a precaution to prevent the spread of the disease further afield.

The prohibition on movement makes it illegal to move sweet chestnut material including plants, logs, branches, foliage and firewood out of, or inside, zones within a 2 kilometre (1.2 mile) radius of six sites in Devon and Dorset, where sweet chestnut blight has been found. These restrictions also apply to oak within 1 kilometre (0.62 mile) of the same sites.

The prohibition zones will remain in place until further notice but are subject to review following future monitoring. The Forestry Commission and the APHA are continuing their investigation into the extent of the outbreak, which was discovered in December 2016, and this work may result in more zones being established. Further advice may follow as the situation develops.

Exceptions to this movement prohibition include oak or sweet chestnut material entering and exiting the zones without stopping. For example, the delivery of plants, logs or firewood which start and end their journeys outside the zones is permitted. Exceptions may be granted in certain circumstances by the Forestry Commission, in the case of woodland sites, or by the APHA Plant Health & Seeds Inspectorate, for horticultural requests. These will be considered  on a case by case basis.

Local woodland and business owners and managers who need further information or wish to request an exemption to move restricted material may contact the Forestry Commission’s South West England Area office by email sue.hallett@forestry.gsi.gov.uk or telephone 0300 067 5856.

The horticulture trade, garden centres and householders should contact the Animal and Plant Health Agency’s Plant Health & Seeds Inspectorate by telephoning 01904 405138 or by emailing planthealth.info@apha.gsi.gov.uk.

Further information and a symptoms factsheet and pest alert are available on our website to help you know what to look for when inspecting your trees. 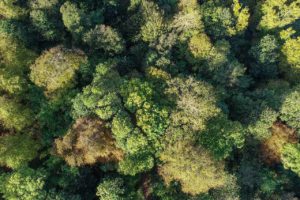 As a member of the HSE’s Arboriculture and Forestry Advisory Group (AFAG), we regret to inform members of another fatality in the sector. The incident,