EU Referendum: The Potential Impact of Brexit on New Productive Planting in the UK

EU Referendum: The Potential Impact of Brexit on New Productive Planting in the UK

In a blog series leading up to the June EU referendum, ICF is looking at different perspectives from across the forestry and arboricultural sector on the potential impact of Britain exiting the EU. Martin Glynn FICFor, Chartered Forester and Rural Development Advisor, examines the potential implications of Brexit on new productive planting in the UK.

At the recent ICF National Conference, a presentation on the National Forest Inventory highlighted the potential for a significant dip in softwood timber supply in the medium term (20 – 30 years). Various ‘smoothing’ options were presented, including the planting of new woodland. Roots to Prosperity, the North of England Forest Industry Initiative, has recognised the impending arrival of ‘Peak Wood’ in the region and proposed the planting of 2000ha of productive woodland per year for the next 10 years. Ignoring for the moment the availability of grant-aid and the complexities of obtaining it, there are two main factors affecting the rate of new planting in the UK – the availability of land, and its cost. 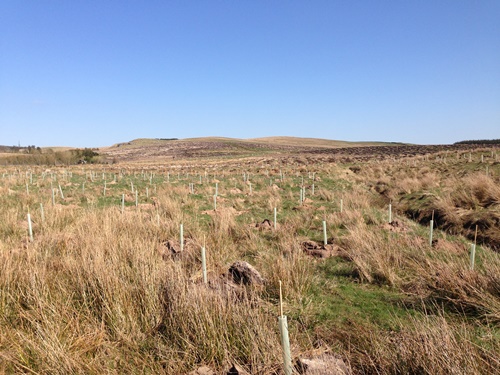 Land availability in the UK has been at a historical low for some time now – until the turn of the century each year saw 100,000ha – 125,000ha regularly traded on the open market. Since then, annual sales have fallen to 60,000ha or less. Prices have, not surprisingly, gone in the other direction, with averages increasing nearly fourfold from £5000ha to approaching £20,000ha. Of course such prices relate to the type of land unlikely to ever be the subject of acquisition for afforestation, but the trends are similar.

So how might BREXIT affect these factors and thus the attainment of the industries preferred planting targets?

A previous blog by Justin Mumford FICFor outlined the support available for farming through the Common Agricultural Policy. Should such support be removed or reduced following a Brexit– and given that it has long been the stated policy of both major political parties to do so it seems not unreasonable to assume it will – this could lead to many farmers, especially in the uplands, not being able to continue farming. The Defra Farm Business Income survey for England in 2014/15 showed that for Grazing Livestock Farms within the Less Favoured Areas (LFA), the Single Farm Payment (SFP) contributed £15,500 to an average net Farm Income of £14,600 – in other words without the SFP the average LFA farm in England would have made a loss.

Such losses could not be sustained in the long term and thus farmers would have to respond in whatever way they could. For some this may mean holdings would amalgamate (especially in the case of tenanted sector), others might seek additional income from diversification or off farm employment, and inevitably some would leave the industry altogether. Almost all conceivable scenarios would result in increased land coming onto the market, with an increasing disparity between demand for, and therefore price obtained by, land that could be productively farmed and make a positive contribution to farm incomes and that which couldn’t – and which might be suitable for afforestation.

The Only Certainty is Uncertainty

So, availability up and prices down – sounds good doesn’t it? But that analysis ignores some of the less tangible influences which could have a counter balancing effect in the event of a Brexit.

The UK has long been seen as a ‘safe haven’ for money looking to invest in fixed assets in a jurisdiction deemed to have long term stable governance and respect for land ownership rights. This is unlikely to change in the event of the UK leaving the EU and indeed may increase, given the perceived benefits of being beyond the reach of Brussels and the European courts. Furthermore, land, especially British land, has long been a prized possession for many overseas investors who may be more interested in attributes such as sporting potential than any meagre income available from a few sheep. Again, such interest could increase in the event of Brexit. An even more contentious issue to grapple with would be the potential for another Scottish Independence referendum. Already reports suggest that investors have been looking south of the border due to land reform and fears of what this could mean in an independent Scotland. Might this mean a reduction in demand and prices in Scotland but the opposite in northern England and Wales?

Like most issues relating to Brexit, when it comes to its affect on land availability and price it seems the only certainty is uncertainty.

For further discussion on the EU referendum, ICF members are encouraged to use the ICF Members’ LinkedIn group