EU Referendum: The Implications of Brexit for Agricultural Payments

EU Referendum: The Implications of Brexit for Agricultural Payments

In last week’s EU Referendum blog article, we learnt of the potential impact of Brexit on forestry in the context of agricultural support. Here Dr Jason Beedell, a Partner in Strutt and Parker’s research team, analyses the implications of Brexit for agricultural payments.

UK farming’s profitability depends to a large extent on payments from the Common Agricultural Policy (CAP). According to government figures, the average cereal, general cropping and livestock farm makes a loss from their agricultural activities. It is income from diversification but mainly from European payments for environmental work, called agri-environment in the table below, and European payments for farming, called Single Payment Scheme, that boosts their income into a profit making position. So, the referendum on whether to stay in or leave the European Union on 23 June is important for the sector. 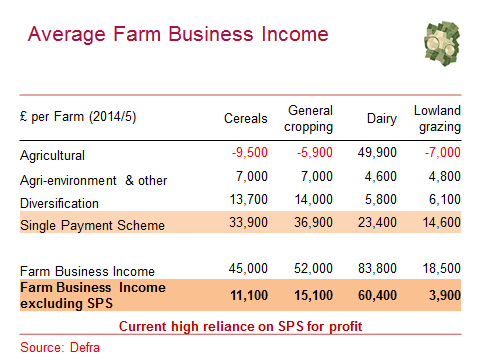 Two significant reports have been published since Christmas on the impact that the UK leaving the EU could have on agriculture, by the Yorkshire Agricultural Society (by a group led by Professor Wyn Grant) and the Worshipful Company of Farmers (by Professor Allan Buckwell). They come to similar conclusions on some of the key issues.

They agree that Brexit would create short- to medium-term uncertainty and anxiety in the agriculture sector while new trade agreements, agricultural payments and regulations were agreed. They also agree that payments to farmers are likely to reduce, especially direct payments (called Single Payment Scheme in the table above), which are seen as most vulnerable to cuts by the UK Government (see slide below on what the Government has said about the CAP and direct payments in particular). This would hit the least profitable farmers and the farming sectors that are most reliant on payments, such as upland livestock farmers, and lead to them leaving the industry. The two reports expect cuts to payments to be tapered over time to allow businesses time to adjust to different subsidy and trading conditions. 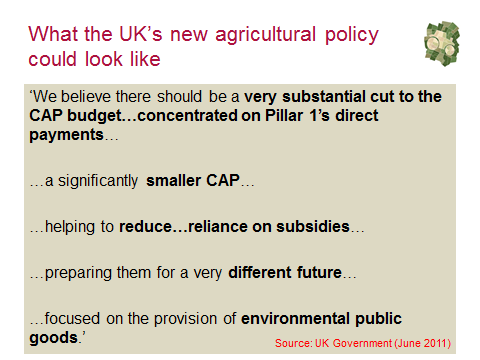 Both also conclude that Pillar 2 rural development payments, which include agri-environment schemes, are less vulnerable to cuts as the UK Government has stated that it wants to support environmentally-friendly land management.

The Yorkshire Agricultural Society report focussed on regulations. It argues that for a number of important areas, including animal health and welfare, plant protection, GM and migrant labour, the opportunities for reducing regulation are limited, especially if the UK wants to continue to trade easily with the EU, currently its largest trading partner, as UK producers will have to produce to similar standards to EU ones.

The Worshipful Company of Farmers report states that output from UK farming could be little affected by Brexit, as little land might be expected to go out of production. The costs of trading with Europe could rise, as being a full member of the Single Market is the least cost way of trading in it. The costs of inputs to farming, including fertiliser, pesticides, machinery, rents and land values, could fall as subsidies tend to inflate costs and vica versa. When all of the above is added together, the total effect is likely to be downward pressure on farm incomes and profits in the short-to medium-term.

While the Yorkshire Agricultural Society report states that ‘It is difficult to see exit as beneficial to the UK farming sector, or to the UK food and drink industry more generally’, the WCF report is more nuanced, stating that in the longer-term, Brexit could lead to a ‘less precarious, more resilient industry capable of dealing with the inevitable challenges it will continue to face not least from climate change.’ This sentence encapsulates a lot of the challenge that will face not just farming but UK voters in the run up to the Brexit referendum – is it better the devil you know? The alternative could be better – but it is hard to articulate and quantify.

For further discussion on the EU referendum, ICF members are encouraged to use the ICF Members’ LinkedIn group.