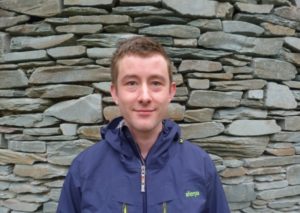 When David Johnes found out he’d become a winner of The Prince of Wales Forest Leadership Award, little did know it would start with a meeting with a future British Monarch, and end up deep in the forests of British Columbia. In his first blog he describes life in camp and the technology and equipment that has helped him on his way.

My placement is with Strategic Natural Resource Consultants working from their Port McNeill office. Strategic also operate from three other offices on Vancouver Island in Campbell River, Nanaimo and Port Alberni. Their primary sectors include forestry, mining and mineral exploration, energy and utilities, transportation and infrastructure and environmental conservation. The company was founded in 2003 and now has over 150 employees.

Due to the remoteness of some of the locations we’ve been operating in, it’s necessary for workers to “camp” in close proximity of the site being worked. Having received an email informing me I was to prepare to leave for a ten day camp shift the day I arrived in Port McNeill, I began preparing my tent and other camping equipment, I then found out (with some relief) we would actually be staying on a fully catered float house. The only way to access the float house was by boat, the journey took around an hour and half and I saw my first killer whale on route!

The camp (Figure 1), owned by the Gwa’sala-‘Nakwaxda’xw Nation aboriginal tribe is operated by Cindy and her canine companion River. Each day we would have breakfast at 6.00 am, gather our equipment and leave for site on the boat at 7.00 am. From the boat drop off we took the UTV (Figure 2) to the forest edge and walked to which ever area we were operating that day. At the end of each day we would return to the harbour where Cindy would collect us and take us back to the float house. Evenings were usually spent organising equipment, drying clothes, having dinner and either going for a walk in the forest behind the float house or attempting to fish.

From my brief experience working in old growth forests around the Belize inlet and North Coast region of British Columbia I’ve found a stark contrast in the forest structure and terrain compared to the UK. A large number of sites used for commercial forestry in the UK are often densely stocked with Sitka spruce and may sometimes provide a test of cardiovascular fitness when traversing stands grown on steep slopes. Usually however, these stands will not allow enough light to penetrate the forest floor for any significant natural regeneration or ground flora to establish.

By comparison the old growth forests found in coastal British Columbia demonstrate diverse age structure with standing and fallen deadwood and areas of open canopy allowing dense areas of shrub and ground flora such as salal, salmonberry, skunk cabbage and various ferns to flourish (Figure 3). Dominant timber species found on the sites I visited included Western red cedar, Western hemlock, Douglas fir and Sitka spruce. With elements of Lodgepole pine, Yellow cedar, Alder, Mountain hemlock and Amabilis fir. During my first camp shift my team leader Tiefer patiently helped introduce me to the features and characteristics of some unfamiliar species. I was subsequently quizzed on my new knowledge, although I soon realised he enjoyed throwing in the occasional trick question!

From a personal perspective exploring the terrain in these alien, almost Jurassic forests requires a lot more concentration! Caulk boots help provide grip when traversing greasy fallen logs bridging gulleys (Figure 3). However, caution is required when choosing foot placement as dead logs often give way as they crumble underfoot and roots hiding in ground flora pose a trip hazard to the unsuspecting. Despite considering myself to be of reasonable fitness, I initially found I was often lagging behind my experienced co-workers who passed through the same terrain with surprising ease!

Below (Figure 4) is a labelled image showing some of the equipment used for field work. The cruise vest is a revelation. Much of the time I was completing field work on my vocational placement in Scotland I was often trying to juggle a combination of a paper map, notebook, handheld GPS, camera and binoculars, cramming anything I couldn’t hold into my jacket pockets. The cruise vest has a convenient place to stash everything I need.

Figure 4: Cruise vest with some of the equipment used for field work

1. Cruise vest – nylon vest with front and back pockets designed to be used in place of a rucksack, the arrangement of pockets allows equipment to be easily accessed
2. Clinometer – used to measure angles of slope or tilt, useful for assessing potential routes for roading operations, deflection lines and as part of the process for measuring tree height.
3. First aid kit – basic first aid kit with compression bandage
4. Tape measure – used when measuring the widths of non-classified drains or streams
5. Waterproof notebook – used for making notes in poor weather conditions, reflective panel is used in conjunction with laser measure
6. Bear mace – to be used as a last resort to prevent attacks from bears
7. Paint markers – a longer lasting alternative to permanent markers for marking tags and ribbons
8. Mechanical pencils – for use with waterproof notebook 9. Ribbon – for marking felling boundaries
10. Caulk books – durable steel capped boots with metal studs screwed into the sole
11. Hard hat with visor – useful for when I bash my head!
12. Hydration pack – more accessible than water bottles
13. Two way radio – used when lone working to communicate with other crew members.
14. Torch, whistle and safety glasses
15. Hip chain – uses a cotton string connected to a mechanical wheel used to measure walked distances
16. Compass – for taking bearings when navigating or measuring degrees of bend in roading operations.
17. Tags for marking felling stations and corners

The principles of forest management practise I’ve witnessed in British Columbia mirror the considerations set out by the UK Forestry Standard. Recognising the environmental, economic and social benefits provided by forest ecosystems and understanding that our current demands need to be balanced with a consideration for the requirements of future generations.

The field work I’ve been involved with includes site assessments for roading, felling boundaries, and silvicultural considerations. All of these operations have involved multiple objectives, each of these operations needed to give thought to the sites constraints and sensitivities whilst maintaining a viable economic return. Some of the constraints and sensitivities on the sites visited included watercourses and drainage channels for which culverts are required for roading operations and buffer zones may be needed when establishing felling boundaries. Areas of unstable soils and existing landslides need to be avoided for the planning of new roads. One recce I took part on with the Forestry team considering silvicultural prescriptions, were paying particular attention to key indicators used for identifying vegetation classification types, some of which are protected requiring exclusion zones to be mapped. A buffer zone was also required around an existing clear cut block to maintain wind-firmness.

Provincial guidelines apply to most sites, however some areas fall in first nations territory where requirements are slightly different. For these sites buffer zones may be measured in tree lengths rather than meters, considerations are also made for artefacts related to first nations’ heritage such as culturally modified trees (Figure 5).

As part of their GIS and mapping process Strategic make use of Apple iPad tablets with the Avenza PDF Maps app installed. Using georeferenced PDF maps on these devices allows the iPad’s GPS sensor to position the users location on detailed site plans created using GIS packages. The Avenza PDF Maps app provides users with a range of tools including the ability to measure distances and areas, find bearings between points, add point or line features and annotate, shade and draw.

The PDF maps app can be utilized on the majority of GPS-enabled tablet or smart phone devices. The app can be downloaded from both Apple and Android app stores and a BETA vesion is now available for users of Windows 8 or Windows Phone 8. A few benefits of using the Apple hardware include the familiarity of iOS, availability of aftermarket accessories including Lifeproof cases which Strategic use to ruggedise and waterproof the tablets, the AirDrop function in iOS allows users to quickly share content when working in the bush without the need for internet access.

One limitation of this technology is the accuracy of the GPS sensors used. When working in an open area without any overhead obstacles the tablets are able to connect to an adequate number of satellites, denser forest canopies can impact the number of connections which reduces the accuracy of the GPS sensor. This is not a major issue as the tablets are primarily meant to be used as a reference tool, for mapping and planning requirements are higher, Trimble units are used to collect data with greater accuracy, these make use of subscription based satellite connections allowing a greater number of potential connections than the iPads which only connect to open access satellites. The other limitation of the tablet hardware is the battery life, when using GPS the built in battery is typically capable of 5-7 hours use which is typically plenty for a day’s field work. For shifts spanning several days tablets will need to be charged overnight.