A very special year for the ‘Tree Oscars’ 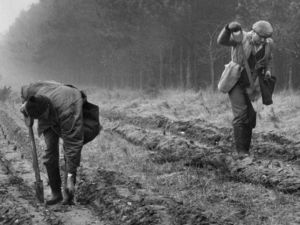 2019 is a very special year for trees – an opportunity to celebrate the centenary of the Forestry Act which created the modern industry.

Contrary to some mischievous suggestions, none of the older and more experienced foresters still working in the industry can remember the introduction of the Act – but they have all benefited from its foresight.

From a position where the countryside had been denuded of tree cover by the rapacious demands of war and industry and had barely five percent of tree cover, the Act created the Forestry Commission and began the long process of returning trees to the landscape – to create a strategic timber reserve, in case another future war demanded that as an essential need.

To mark the centenary, Forestry Commission Scotland is developing a series of events for later in the year (the centenary falls in September) and has agreed to sponsor a prize as part of the 2019 Scotland’s Finest Woods Awards programme – popularly known as the ‘Tree Oscars’.

The one-off 1919 Forestry Act Centenary Award seeks to honour some of the very finest woods in Scotland.

Any woodland created during the last century can enter, but it is likely to be fairly well-established as entrants must demonstrate “clearly and directly” how they have adapted/changed the management over time to ensure resilience both in the past and for the future.

The centenary prize is part of the largest-ever Scotland’s Finest Woods Awards programme – with all the favourite categories returning alongside a second Farm Woodland Award (FWA). The FWA was a real success in its first year, with a superb winner in the Scottish Borders run close by an excellent Highly Commended entry from Aberdeenshire. There was also a Commended prize awarded in the category, showing the strength of entries in year one.

With ever-more focus on mixed land use and diversification of farms, Scottish Woodlands Ltd stepped in to sponsor a special award for farmers or crofters (and/or their foresters) aged 40 or under. SAC Consulting is sponsoring the original Farm Woodland Award which is open to all, alongside popular returning categories for Schools, Community Woodlands, New Native Woods and Quality Timber.

It’s an exciting year for the Awards, which are supported by the Institute of Chartered Foresters and many other sector partners, with more prizes than ever to be packed in to the presentation ceremony at the Royal Highland Show in June – and probably more people than ever packed into the tent on what is always a brilliant occasion.

The Awards programme can’t quite trace its roots back 100 years, but one of the prizes – the Hunter Blair Trophy for Silvicultural Excellence – was first awarded in 1964, with the Royal Scottish Forestry Society administering the competition until 1986.

A few veterans of the industry were active back in 1964 – but if you bump into an old forester who does remember the introduction of the Act in 1919, please let us know. He or she would certainly qualify for an award all of their own.

* Full details of the 2019 Scotland’s Finest Woods Awards programme can be found here – entries must be submitted by 31st March. All winners receive £1000 and a specially-designed trophy.