2016: A Year in Forestry and Arboriculture

Throughout 2016 the ICF blog has showcased member opinions on the maelstrom of political and other changes and what they have meant for forestry and arboriculture. As the year draws to a close, ICF Executive Director Shireen Chambers FICFor looks back on the most important events and their impact on the sector.

The winter of 2015-2016 left its mark on the landscape as repeated storms caused flood damage across the UK. Government set up the National Flood Resilience Review in January, which assessed how the country can better protect itself from future flooding and increasingly extreme weather events. In September their research was published and showed they will plan for 20-30% more rainfall and £12.5m has been allocated for temporary flood defences. However the review lacked specific details on long-term solutions that have dominated the forestry and arboriculture sector discussion on this issue. The use of trees to mitigate flooding has been widely recognised by the sector, and ICF intends to explore this topic further in our 2017 National Study Tour.

What does Brexit mean for Forestry and Arboriculture?

We couldn’t talk about 2016 without mentioning Brexit. Foresters and arboriculturists questioned what this would mean for the both the sector and the wider UK economy. Our members, like the rest of the UK, were divided on the issue. In a series of guest blog articles we showed these varying opinions, looking at Brexit’s potential effect on the nursery sector, agricultural support, land availability and cost, and the environment. The Institute continues to seek clarification on these issues at both government and sector level and will continue to update members accordingly.

While Brexit dominated the public eye, land interests in Scotland were shaken up by the enactment of the Land Reform Bill, which proposes significant changes to land ownership and access rights. This was closely followed by the publication of A Land Use Strategy for Scotland 2016-2020 which promised to consider the opportunities available to land managers to combine traditional upland agri-land uses with woodland/forestry.

Meanwhile the devolution of UK forestry also pushed forward. In September the Scottish Government opened its consultation on the future of Scottish Forestry. A draft bill proposed a new agency – Forestry and Land Scotland – being created to manage all publicly-owned land, and that the policy and regulatory functions of Forestry Commission Scotland would be absorbed into Scottish government. There was significant concern over this from both Institute members and the wider sector who felt that loss of forestry expertise would be inevitable. The Institute’s response stressed the advantages of maintaining a single body responsible for promoting the interests of forestry in Scotland, advising Ministers on policy, providing advice and support for the private/voluntary sector, exercising regulatory functions, and managing the national forest estate (and other public land).

It was another year of concern for UK trees and forests, as we saw new tree health threats face the UK. The Forestry Commission encouraged UK foresters and arboriculturists to check their sweet chestnuts after a case of Oriental chestnut gall wasp was discovered in the south east of England this summer. The EU implemented emergency controls to prevent the spread of Xylella, which has caused significant damage to crops in Italy and France. It has over 300 hosts and is considered to pose a threat to UK oak trees in particular.

However it wasn’t all bad news. The tireless work of forest researchers also reaped reward in 2016 – UK scientists identified the country’s first ash tree to show tolerance to dieback, and it is hopeful that selective breeding could now help the UK ash population to recover.

In 2016 ICF continued to shine a spotlight on the deficit of skilled graduates in forestry and arboriculture. In March we launched our Forestry Careers in 60 Seconds campaign, supported by Forestry Commission Scotland and Confor. This video campaign aimed to show young people the diverse range of careers in the forestry sector via social media channels. To date, the video has clocked up over 6,000 views on YouTube, in addition to over 40,000 views on the Facebook advertising service. In addition to showcasing the range of forestry and arboricultural careers, the video aimed to promote diversity in the sector, highlighting some strong female role models in particular. Our sector needs to attract more young people and a more diverse workforce, and to do so we need a sector-wide effort to foster a work environment that will retain them. The Institute is working with Skills development Scotland and the National Forestry Learning & Development Working Group in England to develop ideas on how we can achieve this.

After the maelstrom of political change in 2016, there is undoubtedly further uncertainty in store for forestry and arboriculture in 2017. Brexit will have a huge impact, but also provides great opportunities as the future shape of policy and funding is open to debate and discussion.

In order for government to remain engaged, we need the public on side. With this in mind, the Institute has been working with The Woodland Trust and 50 other partner organisations to help define and promote a new Charter for Trees, Woods and People, which will be launched next year. We are also teaming up with 20 natural and built environment organisations to deliver our third triennial Trees, People and the Built Environment conference, which will highlight the importance of street trees in people’s everyday lives, and the social, economic and environmental benefits they bring. 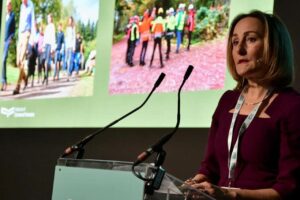 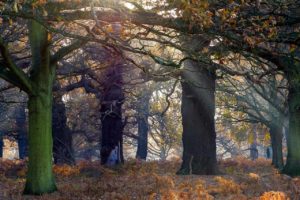