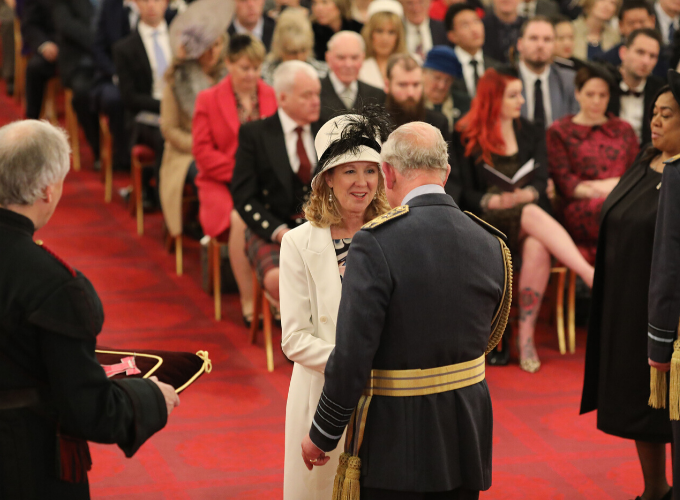 A Member of the Order of the British Empire (MBE) medal has been awarded to Shireen Chambers FICFor, Executive Director of the Institute of Chartered Foresters, in the Queen’s Birthday Honours List 2019.

It is in recognition of the positive contribution she has made to forestry, including her work with TREE AID, an international charity that works with local communities in the drylands of Africa to help them protect and grow trees for themselves and future generations. Shireen has been Chair of TREE AID since 2017.

Shireen studied forestry and soil science at Bangor University before embarking on a career overseas, working with the Government of the Bahamas to set up a new forestry department in the 1980s. She returned to the UK to work with the Central Scotland Forest and continued as a practitioner in community and urban forestry throughout the UK.

She has been in her current role as Executive Director of the Institute of Chartered Foresters since 2006 and has overseen a doubling of member numbers to the Institute in that time. She has held numerous non-executive board appointments, including her current post with TREE AID.

“It is a great honour for my work to be recognised but I am receiving it on behalf of the fantastic teams at both the Institute of Chartered Foresters and at TREE AID, who both contribute in very different ways to making a difference with trees. We need skilled professionals to ensure that the planting of trees and woods, their conservation, use, and management are essential elements of our common life, whether we are in Africa or the UK,” Shireen said.

“Forestry has provided me with a wonderful career and I would encourage any young person wanting to make a difference to the world to think about working in a sector that has a pivotal role in helping to combat climate change on a global scale,” she added.

Alastair Sandels FICFor, President of the Institute, said: “I would like to congratulate Shireen on behalf of members of the Institute and staff who have helped to fulfil her vision. The honour reflects her leadership and dedication which has led to growth and enhanced the Institute’s reputation.

“Shireen has also championed continuous professional development and strengthened the Institute’s Code of Professional Conduct. There are many challenges ahead for the sector and we all look forward to working with her going forward towards our 100th anniversary in 2025.”

John Moffett, TREE AID Chief Executive Officer, said: “I am delighted that Shireen’s passion for the conservation of trees and forests has been recognised and honoured with the MBE. As chair of TREE AID, Shireen’s leadership and wealth of experience from her work in the Bahamas and the UK, as well as her clear perspective on good practice in forest management internationally, is invaluable to achieving TREE AID’s mission”.

Nadinè Galle Previews Her Presentation for Trees, People and the Built Environment 4