Plastic with a purpose

Associate member Simon Place, Account Manager at Tubex, explains how plastic still has a vital role to play in forestry.

I read with great interest Stuart Wilkie’s FICFor CEnv recent blog on forest plastic.  The first thing that struck me after reading it was why nobody had really written about this subject before?  The BBC show ‘Blue Planet 2’ has had a lot to do with the public suddenly sitting up and feeling guilty about how their plastic is dealt with after use.  We do indeed see discarded plastic in our woodlands (discarded being the issue as opposed to plastic with a purpose) and it seems, so far, that Forest Stewardship Council has turned a relative blind eye to this issue in the UK unlike Germany for instance where the ‘plastic litter’ must be removed from site and disposed of properly.  Discarded forest plastics will include, in no particular order: tree shelters, planting bags, oil containers, grease tubes, contractor yogurt pots (a pet hate of mine), crisp packets, water bottles, abandoned warning signs, pieces of vehicle under trays (from personal experience), shrink wrap, tree stake pack banding  and marker tape to name but a few – we can all list them and more.  Most of these are from forest operations and the people who work in the forest, so the issue is mainly being created by the people involved and should therefore be easy to resolve in the short term, unlike the wider global problem of floating plastic debris in the Pacific Ocean.  To single out redundant tree shelters as the main forest problem is a little unfair, but I agree they are the most visually prominent of our forest plastic issues, although it is all aesthetically displeasing no matter what the item is.  I think it’s terrific that a private commercial forestry company like Scottish Woodlands has taken the lead through Stuart to open up discussion on the subject of spent plastic in their managed forests, although I am slightly surprised at the lack of rhetoric following the publication last month.  It is a real concern for all people involved with the industry as to how plastic materials are dealt with at end of service life.

At the moment, it seems everyone now hates plastic with a passion and the images we see of the impacts on nature in the wider global picture are indeed very real and disturbing.  But there is no question in my mind that ‘plastic’ in its various forms and compositions is an incredible invention that has transformed lives around the world and is now a complete, integral part of all our systems whether we notice it in our daily lives or not.  The issue for me is clear; it is what happens at the end of the plastic’s use that is the area for concern for forestry, in the short-term at least.  The basic ingredient of a tree tube has not changed much over time being namely polypropylene (PP), which is widely used in millions of applications and is produced as a by-product from the petroleum industry – one of the oil-based plastics Stuart referred to in his blog.  These humble tubes have enabled millions of trees to grow over the last 30 years, which would have otherwise been eaten or killed with herbicide (another blog subject possibly).  I can just about remember the ‘Plant a tree in ‘73’ campaign, which was rather hastily followed by the lesser known but equally catchy ‘Plant some more in ‘74’ campaign, mainly because around 60% of the previous trees had died.  Had we had plastic tree shelters in such abundance then we would have seen faster establishment and quicker success as well as saving money and precious tree stock.

Stuart mentioned that he had stopped believing the degradability claims many years ago as regards the breakdown of the tree shelters he had been using.  This is in part an issue caused by the application, rather than the product.  A PP tree shelter will breakdown in the sunlight over a stated time period due to the addition of a UV stabiliser to slow the natural degrading process and enable a service life (PP tubes are photodegradable as opposed to biodegradable) but once the tree inside the tube grows out, it casts shade and the degrading process slows down.   Also, early tubes had way too much UV protection and we do see 30 year old tubes of various manufactures still seemingly ready and willing to give continued service.

Those pesky deer and rabbits

The use of tubes to protect broadleaves (and increasingly conifers at shorter tube / wrap heights) from deer species and rabbit etc has several purposes, which has a bearing on the lifespan of the tube in the forest.  To start with, the young tree is protected from browsing and herbicide application, with the additional benefit of the microclimate inside the tube for faster establishment.  Once the tree has grown out of the top of the tube the removal timescale needs to be carefully considered.  Removing a tube too soon can expose the stem of the tree to deer rubbing and stripping, killing the tree.  The option many people prefer is to leave the tube on as long as possible as the tube continues to provide stem protection.   At this stage, the PP tube is probably around 8-10 years old and cannot be re-used for this sort of application.  What happens next is the issue we often see in the woods, as the tube is not needed any more and is left in the forest to break into pieces, fall over and get scattered in the wind or squashed into the soil.  It is at this time action should be taken by a responsible owner / forester to remove the tube from the tree before it disassembles itself in situ.  Discarded tubes can sometimes create extraordinary wildlife habitats if managed properly in small secured heaps with brash placed on top.  It is surprising what you will find in a hollow inert tube and can actually add to the biodiversity options.

As most tree tubes are made from PP, they can be easily recycled even though they are probably stained with 8-10 years of moss, weather and creature frass etc.  All that is required is to contact a company like Agri-cycle and they will send out a ‘dumpy bag’ in the post, which can then be filled with 200-300 old tubes and they will collect nationwide for a very reasonable fee.  The nylon ties can also be recycled too as can mesh protection, which is often made from recycled Polyethylene. The resulting material will be cleaned, processed and become wheel barrows, buckets and the like, which is a great PR opportunity for any organisation if nothing else.  As regards the future for tree shelters, this is a difficult one for sure.  We have seen non-plastic tree protection come and go over the years, some with questionable sustainability claims, but the main problem is light transmission.  A twin walled PP shelter is a strong product and the better ones let the light through at around 75%, performing as customers would expect. Using alternative materials has so far met with limited success, mainly due to light exclusion and poor strength, which is not a beneficial trait of any tree tube.  It is possible to look to new materials but the availability, cost and practicalities would make the products very expensive.  For now, companies mainly use PP for their solid tubes, which is inert and does not leach harmful chemicals into the environment as it is comprised of carbon and hydrogen, unlike PVC found in spiral guards, which contains high levels of chlorine.

It might be apparent by now that I feel the forest plastic issue at present is not so much about the products used in the forest but about the desire, ability and resolve to deal with the arisings once we have finished with the application.  Going away from plastic generally will take decades, if we ever do.  Plastics still have a vital role to play in the protection of our natural landscape due to unnaturally high deer and rabbit populations in the UK, but we need to manage our plastic and take responsibility post-use.  I believe the forest industry can indeed keep the ‘green’ credentials and continue to use inert plastics in forestry.  Our plastic consumption and waste risk compared to other industries is microscopic and in our case, any plastic can be well controlled and managed on site.  As an industry, we need to get to know and understand the recycling options in a greater detail and balance this against the much wider plastic issues from Africa and Asia. The Economist recently ran an environment feature recently and stated that ‘last October scientists at the Helmholtz Centre for Environmental Research, in Germany, found that ten rivers (two in Africa and the rest in Asia) discharge 90% of all plastic marine debris. The Yangtze alone carries 1.5m tonnes a year’. The UK forest industry looks quite clean compared to this but there’s no harm in aiming for the highest standards.

Disclaimer: The views and opinions expressed in this article are those of the author and do not necessarily reflect the views of the Institute of Chartered Foresters and Berry Global. 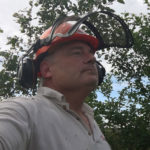