A Walk in the Woods – Mirehouse Estate, Keswick Cumbria

The North of England Region is trialling a new approach to regional meetings by hosting local and low key events during the weekend, and hopefully more often.  The first meeting was held on Saturday 4th March at Mirehouse Estate near Keswick, with kind support of the current and previous owners, James and John Fryer-Spedding.

The meeting was attended by 25 individuals along with a group of University of Cumbria student members; it was a strong turnout on what was a pleasant spring day.

The walk started at the foot of Skiddaw and considered a common dilemma facing woodland owners.  What do you do when improved economics and outlook for timber, matched with grant aided access improvements, no longer match the plans you drew up several years ago when things didn’t look so promising?  In this particular example a 14 ha woodland was felled with a view to restoring it to native woodland (with grant aid support which is no longer available) but significant improvements to the road, new forwarder tacks and rising timber prices now suggest a viable future but felling licence conditions cannot be changed.  There was a strong consensus amongst the group that restocking with productive conifers was very much desirable but the Estate will strictly be in breach of felling licence conditions and might be deemed to not fulfil FSC audits if they take this route.  A tricky situation and one which owners and managers will need to resolve.

The walk moved on through impressive oak woodlands. Where access is better, these are managed for long term oak planking production recently facilitated by heavy thinning and removal of low quality stems which now allows some replanting opportunities. Were access is poor, the woods are left untouched to provide biodiversity and landscape, which are enjoyed by the many locals and tourists who walk, run, cycle and ride through the woods.

Many of the woods are PAWS woodlands and the group looked at recent larch selective felling which has retained an open and partial canopy of maturing sycamore.  This steep site was being mounded and forwarder tacks restored to provide enhanced access with a view to replanting with oak at more commercial spacing (2x2m).  A trial planting this winter with open planted oaks and oaks in spiral guards was being tested to assess potential impacts of deer pressure.  The hope is that with the high levels of public access deer are constantly disturbed and their impact is reduced; a commercial benefit from free access! We will see?

While there are some advantages to high levels of public access, the group was shown the over side of the coin.  Hidden in the depths of a spruce stand and the obvious result of hard labour and much effort, was the most recent example of unauthorised mountain biking trail construction.  The constructed jumps could only be marvelled at and the group felt that the felled trees showed obvious competence with a chainsaw.  Earth ramps at the top of the wood also allowed uninterrupted biking over fences but were now allowing uninterrupted access for the resident Herdwick population.  The group were pleased this was not their problem to resolve.

Moving on we looked at Sitka spruce stands on steep PAWS sites.  These had been thinned in recent years with hill climbing harvesters to leave some high quality stands now over 45 years of age.  In the initial forest plan of 2002 these stands where seen as being CCF areas but it is clear that the steep slopes mean the economics of thinning are marginal.  It is likely that small clear-fells (1.0 – 2.0 ha) will now be favoured to ensure a capital return and that these sites will be replanted with productive conifers.

Discussion considered the implications of replanting PAWS sites with heavily shading conifer species, particularly where the felled conifer crop was Larch.  Crispin Thorn MICFor of the FC highlighted examples of felling licence restrictions and detailed restocking conditions, which stipulate owners using broadleaves and preventing the use of Spruce or Fir where there was evidence of remnant semi-natural ground flora.  These rulings, based around clauses in the UKFS Biodiversity guidelines are something we will no doubt hear more about and pose a further challenge to private woodland owners looking to economically manage their woodlands in the face of Larch disease.

Mirehouse estate, showed further recent examples of where Larch is being removed early as adjoining woodlands now have Phytopthora infections and prevailing winds mean the estate woods are directly in line, making each spring a time of apprehension.

Figure 4 Mature Larch and Sycamore. A CCF stand now to be cleared of Larch to avoid the risk of Phytopthora.

The walk continued with a stroll through a recent Countryside Stewardship funded new broadleaved woodland,  planted with a view to having further oak production while incorporating a range of more decorative species within clear view of the main A66 road.

The final stops looked at further PAWS restoration and a restocked clear fell, where discussion centred on restocking strategies and weevil control.  The Estate has been using large 2+2 trees, treated with Gazelle and this has provided excellent control, minimal beat-up and now has trees close to 1m tall after two summers.

The walk concluded where we started, several miles and five hours later.

Thanks are extended to James and John Fryer-Spedding for showing us round their woods. 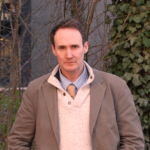