The fight against a killer tree disease now particularly affecting all of Galloway has been given a £1m boost in the Scottish Government’s budget.

Forestry Commission Scotland announced this week that additional funding has been allocated to help Scotland’s efforts to tackle Phytophthora ramorum in Larch, which has progressed rapidly in the south west of Scotland since last year.

The disease kills larch trees – its main tree host – and has spread to the extent that most of the larch trees in Galloway will need to be felled over the next two to three years.

Environment and Climate Change Minister, Paul Wheelhouse, said: “Scotland’s woodlands and forests are under threat from a range of serious tree health diseases and the significant and dramatic impact of Ramorum on larch will have long lasting implications for the forestry sector in Scotland.  I saw the devastation the disease is causing when I visited Galloway in August. Forestry Commission Scotland is working with other land owners – and with the timber and processing sectors – to meet this challenge head on and manage the collective response to this disease.

“This additional funding from the Scottish Government will help ease the financial burden of dealing with infected areas of larch to minimise the spread of the disease. Work is also underway to make best use of the affected timber.

“Funding this remedial action now will pave the way in the longer term for action that will diversify and enhance the local environment in Dumfries and Galloway, ensure continuity in the natural resources in the area and underline the Scottish Government’s commitment to enable those living and working in our rural areas to contribute to a strong, cohesive Scottish economy.”

The disease has also had an impact on nurseries, parks and gardens in Scotland and current activity to inspect and monitor premises throughout Scotland will continue.

As part of the ongoing operation in Galloway, the Scottish Government will look to engage with all stakeholders to keep them informed of developments.

The funding will be used to support woodland owners who have been directly affected by the disease.

First found on larch in Dumfries and Galloway in 2011 but now widespread in the region, the disease can only effectively be tackled effectively by felling or killing infected trees and other nearby larch in a bid to stop it spreading.

More information can be found at www.forestry.gov.uk/pramorumscotland 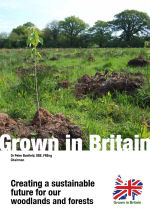